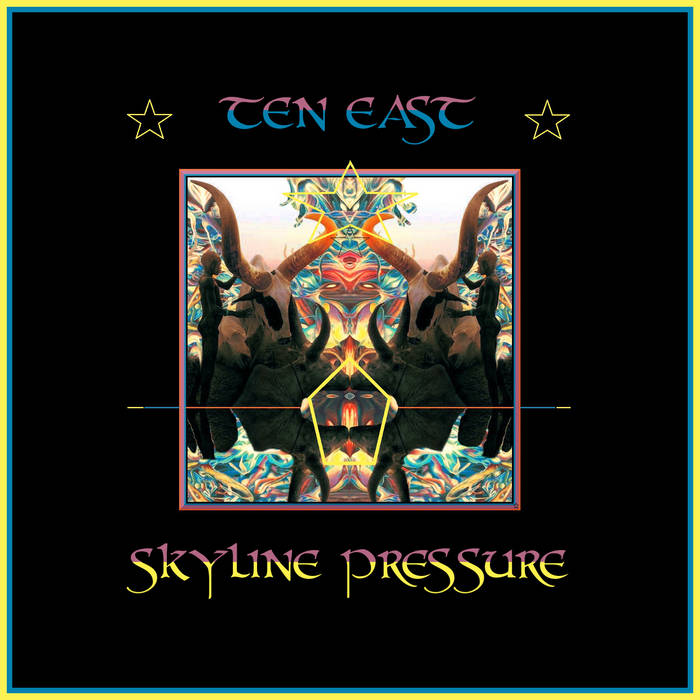 TEN EAST is an experimental/instrumental rock project based in the Palm Desert and Los Angeles area of the United States. Ten East has always been a revolving door of musicians who each share a common respect for improvised jamming mixed with years of playing and listening to all types of rock, psychedelic, Latin, jazz, blues, surf, and punk music. The end result is an intense, cohesive wall of sound of heavy, dark, instrumental blues with psychedelic and surf overtones. Forever the constant member, though, is Gary Arce- known mostly for Yawning Man, but also for his role in many other projects including ZUN, Yawning Sons, Sort of Quartet, WaterWays, etc.. Gary is known to work feverishly to create new music with musicians who vary in sound, and locale. Often from across the country but- in this instance- across the globe, for this very special release...

'Desert legends and Dutch heavy rockers sometimes get together on stage and it turns out better than anyone could’ve possibly imagined. It was the case when guitarist/desert rock progenitor Gary Arce and drummer Bill Stinson of Yawning Man wound up playing with bassist Erik Harbers and guitarist Pieter Holkenborg of Automatic Sam at the Mañana Mañana Fest (which Harbers and Holkenborg also organize) in the Netherlands in 2014.

Although the impromptu foursome had never played together before, the chemistry was there. The fluidity was there. As they jammed in and around Yawning Man songs, it was clear the union had a breadth that was only beginning to be explored. Two years later, Arce, Stinson, Harbers and Holkenborg have come together again, and recorded their sounds via Harper Hug (Thunder Underground Studios) and this time as a new incarnation of Arce’s TEN EAST project. They proudly present their album, Skyline Pressure.'
~Courtesy of JJ Koczan

His full review of the album can be found here:
theobelisk.net/obelisk/2016/11/03/ten-east-skyline-pressure-review/

*The name “Ten East” comes from the highway which leads from the heart of Los Angeles towards the desert cities. The music is an expression of feelings that overcome oneself as they travel the two hours’ time down the length of highway, leaving behind the bustling metropolis and suburban sprawl in the wake of the mesa, mountains, and distant windmills.

***We will announce on our facebook page when and where we will have our physical recordings (CD, VINYL) available for you! We apologize for any confusion regarding this release. For now, we hope you enjoy the download. Please, keep in touch with us via Facebook:
www.facebook.com/teneast/

*^We are not currently involved with peddling any of the previous Ten East releases. Please check online if you wish to purchase any of them. :-)

BIG thanks to Mario Lalli, and Harper Hug/Thunder Underground.
Of course, we are forever grateful for all of our friends/fans, who constantly and consistently support us. We couldn't keep doing what we do without YOU all!!! We love you and we can't wait to see you on tour, hopefully soon. XO

Bandcamp Daily  your guide to the world of Bandcamp